FIRST HALF OF THE YEAR

SIGNIFICANT EVENTS IN THE SECOND QUARTER

SIGNIFICANT EVENTS AFTER THE END OF THE PERIOD 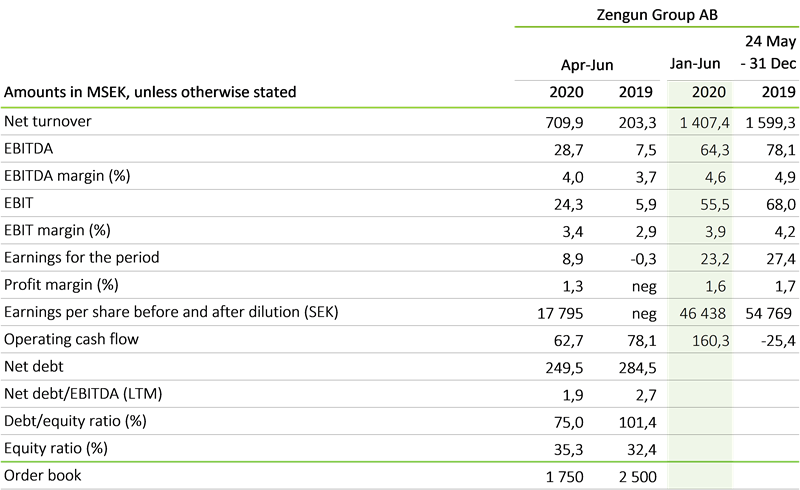 Statement by the CEO

Continued growth in the second quarter

The Zengun Group reported continued strong growth in the second quarter of 2020. Turnover in operating activities amounted to MSEK 710, corresponding to year-on-year growth of 19% over the preceding year’s MSEK 599. EBITDA for the quarter totalled MSEK 25.6 (24.1), entailing an EBITDA margin of 4.1% (4.0).

We can thus summarise the first half of the year in turnover of MSEK 1,407.4, corresponding to year-on-year growth of 19%, with an EBITDA of MSEK 64.3 and an EBITDA margin of 4.6%. We succeeded in strengthening profitability in RA Bygg – the company posted an EBITDA margin of 4.6% for the first six months of the year. The operating cash flow during the second quarter was MSEK 62.7, meaning that the operating cash flow for the first half of the year totalled a very gratifying MSEK 160.3.

At the close of the period, the order book totalled MSEK 1,750, compared with MSEK 2,140 in the year-earlier quarter. New orders during the period amounted to approximately MSEK 300, where the agreement with Fabege for the remodelling of an office building in Arenastaden was our single largest order, with an order value of approximately MSEK 140. The property will include, among other tenants, Fabege’s new headquarters.

I’m also very pleased to announce our new partnership with Investor-owned Vectura Properties and the new construction of their major investment Forskaren in Hagastaden, a new meeting place within life science. Work has begun with project planning and land use planning. The joint intention is to sign a construction contract on the project by the end of the year, with a project timetable of approximately three years.

The ongoing pandemic makes market trends difficult to assess. Moving into autumn, the sentiment we’ve noticed in the market is more cautious than previous, and certain planned project starts in Stockholm might be delayed.

So far we have been able to maintain a high rate of production since we find ourselves in the intense end stages of four major projects, and we can look back on some exceptionally strong years of nearly 20% growth per year. Looking ahead, we’re entering a new period where a number of our major projects for the coming years are still in the planning and land use planning phases besides the above Vectura project, including Haga Norra for Fabege and Orgelpipan for Klövern, which are not reflected in the order book. The total estimated construction contract volumes pertaining to these initiated project partnerships will amount to a higher level than we have had previously.

Our ambition is to contribute to positive partnerships as best we can so that Stockholm continues to grow!

The Zengun Group is one of the leading construction contractors in Stockholm and carries out construction projects on behalf of well-known customers in the real estate industry. While the main focus is on commercial properties, the portfolio also includes residential projects and projects in the public sector. The Zengun Group is a complete supplier and partner, with a customer-centric approach. The Group has approximately 200 employees and net turnover in 2019 amounted to SEK 2.6 billion. #zengunbuildingstockholm